Possible linkage of murder of attorney at law Martins Bunkus to ABLV Bank has been exposed, documents submitted to the responsible authorities 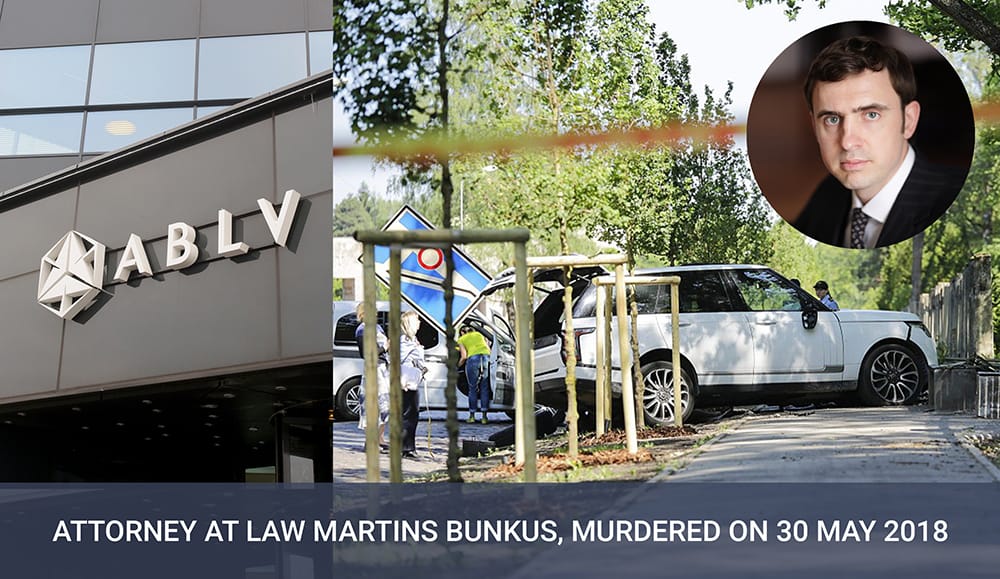 Evidence, collected for a year, and proven sufficient suggests, that the murder of attorney at law Martins Bunkus is likely to be linked to protection of the interests of ABLV Bank (Latvia) and its clients.

More than a decade Latvia has been one of the largest players in multi-billion money laundering schemes and has struggled to implement and enforce effective anti-money laundering legislation.

On February 13, 2018, the Latvian banking sector was rocked by another scandal of money laundering. The US Treasury Financial Crimes Enforcement Network (FinCEN) stated that it “has reasonable grounds to believe that ABLV executives, shareholders, and employees have institutionalized money laundering as a pillar of the bank’s business practices.” [1]

At the same time, attorney at law and public official – Martins Bunkus, had at his disposal materials that contained information on the ABLV Bank possible participation in severe money laundering over a long period of time.

We presume that these materials among other supported allegations, expressed in FinCEN’s notice about ABLV Bank’s involvement not only in money laundering itself, but also in the organization of related money laundering schemes.[2]

It may be assumed that being aware of the status and influence in Latvia of such possible money laundering scheme participants, and having a sound concern about his safety and life, attorney at law Martins Bunkus having the abovementioned materials turned to, in his opinion, the only reliable and Latvia’s most important cooperation partner in the fight against money laundering – USA.

On May 30, 2018, at around 8:40 am on Aizsaules Street 1, Riga, Latvia, Martins Bunkus was shot dead. Such a brutal murder of a public and a judicial figure is an unprecedented crime in the recent history both of Latvia and the European Union.

Shortly after the murder of the attorney at law Martins Bunkus, on June 12, 2018, the FCMC, despite the facts and allegations expressed in the FinCEN’s notice about potentially severe ABLV Bank violations of the laws and regulations, approved ABLV Bank’s self-liquidation.

In consideration of abovementioned, Martins Bunkus family expresses its official opinion on the murder version of attorney at law Martins Bunkus. In family opinion, facts and circumstances mentioned herein proves that

the murder of Martins Bunkus is linked with ABLV Bank’s and its clients possible unlawful interest protection and ABLV Bank’s self-liquidation plan approval.

The murder of Martins Bunkus may have enabled the prevention of potential threats to the interests of ABLV Bank and its clients, which may be caused by the materials, which were at the disposal of Martins Bunkus. Whereas proactive action of Martins Bunkus – opposing ABLV Bank’s self-liquidation plan, could have prevented the possible hiding and destroying of this information.

With the facts and circumstances mentioned herein, as well as with other information at the disposal of the Bunkus family, Martins Bunkus family has turned to Latvian law enforcement agencies and other institutions responsible for combating money laundering and terrorism financing, which will examine the above-mentioned version and assumptions in accordance with the law.

[2] “ABLV management orchestrates, and permits the bank and its employees to engage in, money laundering schemes. (..) The bank proactively pushes money laundering and regulatory circumvention schemes to its client base and ensures that fraudulent documentation produced to support financial schemes, some of which is produced by bank employees themselves, is of the highest quality.” Ibid. p. 6987 – 6988.