The Bunkus family will establish a foundation for promotion of investigation 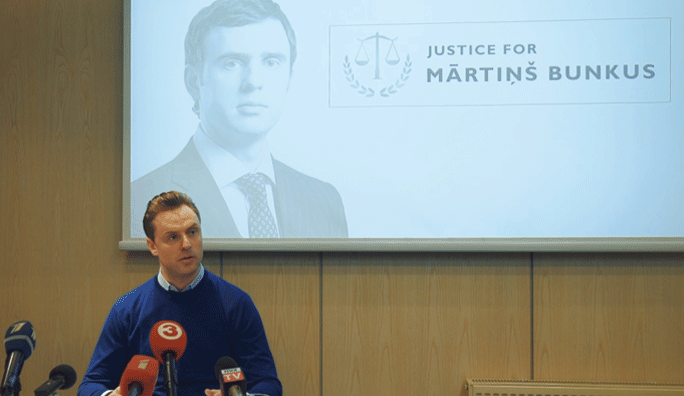 Taking into account the lack of significant progress in investigation of the murder of Martins Bunkus five months after the crime, the Bunkus family will establish a foundation aiming to promote the course of investigation, to aid the work of law enforcement institutions by supporting and initiating international cooperation and involvement of experts, as well as by ensuring regular information to the Latvian society regarding the progress made in investigation to the degree not to interfere with the investigation. The ultimate objective of the foundation is to promote renewal of society’s trust in Latvia as a state under the rule of law, and not a place ruled by habits and methods of the criminals.

“During the last five months, investigation has not made significant progress, and in cooperation with the experts we have weighted what has been done during investigation and what errors we believe were made during the first days following the murder.

Our analysis has resulted in the conclusion that the Police has not acted in its most professional way neither right after the crime was committed, nor later. Therefore, we have decided that we should assist the law enforcement institutions by facilitating the circulation of information, by involving the experts, asking for foreign aid. In order to do it effectively, we will establish a foundation, which will gradually become the central platform of our efforts,” explained Kristaps Bunkus, brother of the killed Martins Bunkus.

Currently the main observations of the Bunkus family regarding the process of investigation show insufficient decisiveness by the Police and other institutions and lack of professional actions right after murder, ineffectively cordoning off the scene of crime; failure to involve experts; lack of immediate reaction to possible escape routes of murderers and on the state borders; insufficient processing of electronic data and testimonies; delayed identification of witnesses; insufficient involvement of resources in further process of investigation; and unwilling use of foreign resources.

“Right after the murder of Martins, the political leaders of Latvia expressed a strong commitment to find the offenders; they talked of involving foreign experts, including experts from the USA, as well as about announcing reward, and urgent reaction in search for murderers, for which no resources would be saved. None of this has been done. Instead, a small group of police officers deal with this crime, which is international in its scale most likely; the group of experts is surely honest and knowledgeable; however, we believe that its resources are simply insufficient. We will try to help them,” continues Mr K. Bunkus.

Operation of the foundation and newest information on investigation will be available also on website www.jfmb.eu (abbreviated from “Justice for Martins Bunkus”). Currently, the foundation will be financed by the Bunkus family, and its work will be headed by Kristaps Bunkus, brother of Martins.